5 Reasons why "Human Capital Management" is Different in Government

The big picture: commercially-available HCM and HRIS software rarely provide full capabilities for governments
Why it matters: wage bills are often the largest expenditure in government organizations. Developed country public services expenditures range from 15% to 20% of GDP representing 10% to 35% of all employment according to the OECD. In the OECD-countries, the average public sector employment rate was 21.3% in 2013. ILO data in Wikipedia shows that the share of employment by the public sector is higher in developing countries. 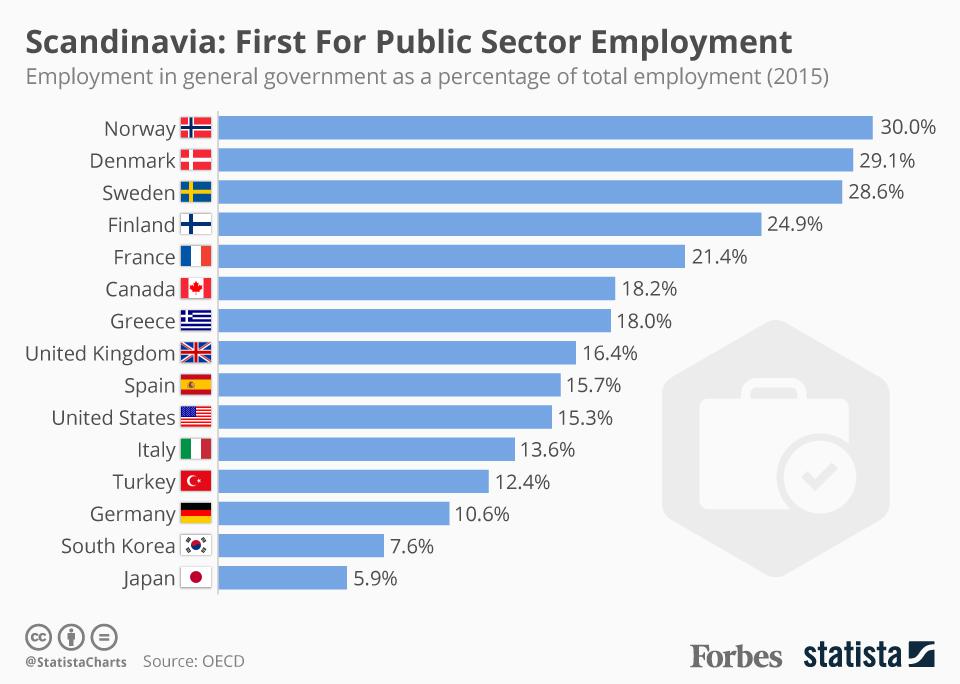 At around 20% of total country employment, and 15% of annual GDP in wage bills, salary budget scrutiny, risk management, and spending predictability is critical in government. This is particularly true when newly elected governments revisit civil service salary scales. Not to mention adapting pension mechanisms, adding to long-term entitlement contingent liabilities. For example, the South Africa public sector wage bill now swallows nearly 35% of the budget and 14% of GDP, representing the largest expenditure category, according to an analysis by Moneyweb:

The bottom line is that civil service management differs from private sector human resources with: 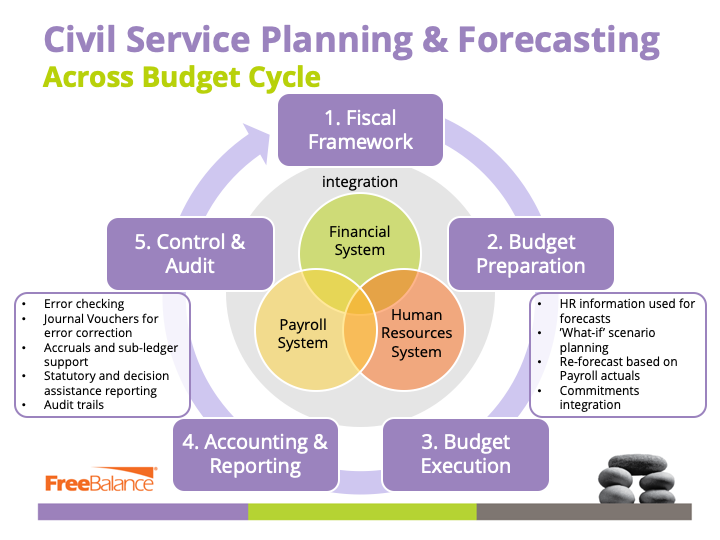 1. How does “budget management” make government payroll and civil service expenses different from the private sector? 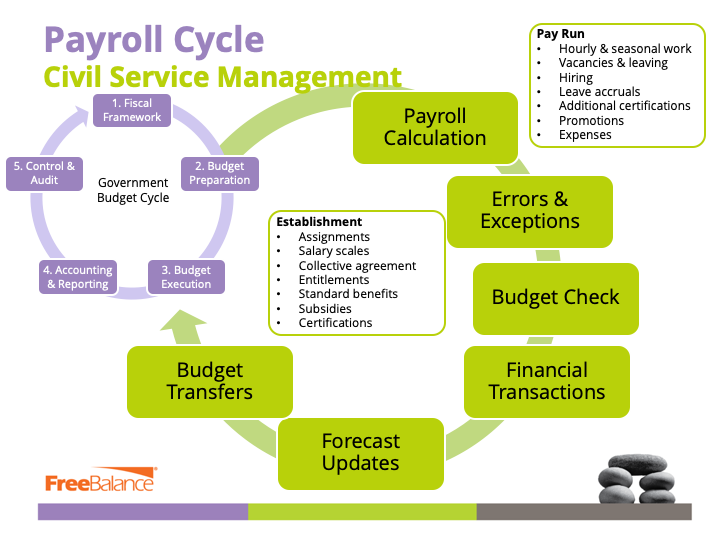 2. What is different about payroll rules in government compared with businesses?

3. How is “budget planning” different in government than the private sector? 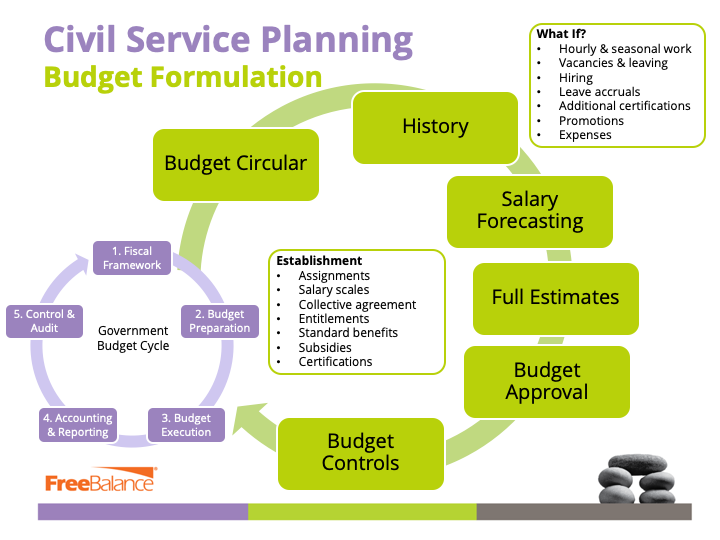 Governments engage in complex civil service “what if “planning consisting of payroll calculations & other public service expenses based on establishment rules
All public financial functions, including payroll, are about budgets. Budgets have a purpose: to achieve desired outcomes. Salary planning has to take outcome factors into account, according to the IMF:
“Effective management of wage bill spending is needed to ensure that the desired public services are delivered in a cost-effective and fiscally sustainable manner. This requires adequate fiscal planning to ensure appropriate financing of the wage bill, competitive compensation to attract and retain skilled staff and incentivize performance, and the flexibility to adjust the level and composition of employment to respond efficiently to demographic and technological developments. Experience has shown that countries across all income levels have faced challenges in these areas.”
Budget scenarios to meet legal requirements and support credible budgeting are complex because scenarios include:

4. Why is payment management more complex in government? 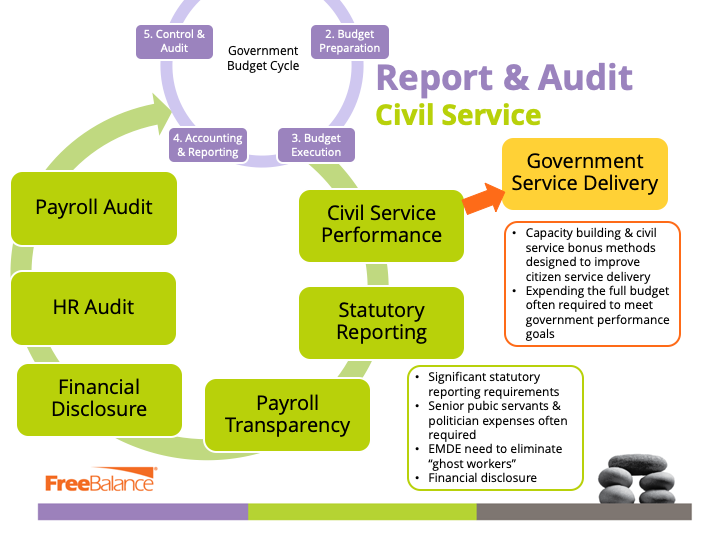 5. How is workforce management more complex in government?

An alternative view is that software designed for businesses can support governments:

The bad news: bolting on government-specific applications, like FreeBalance Civil Service Planning, or code customization is not sustainable

Background: FreeBalance focused on financial and payroll budget management for the Government of Canada in the 1980s.

What can we learn from the “Phoenix Pay System” PeopleSoft implementation fiasco in the Government of Canada expected to cost up to C$2.2B in total in unplanned cost? A tender awarded on June 29, 2011 and not yet meeting government requirements?
80,000 payroll rules and 80 collective agreements are difficult to implement in software written for the private sector – meaning  that upwards of 3/4 of all public servants had pay errors. Some were not paid at all: 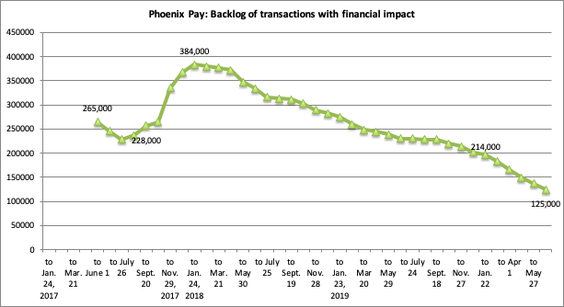 from the Ottawa Citizen
July 28, 2020 Update: “Since January 2018, the peak of the madness, the backlog of all pay transactions requiring action has dropped by about half to 230,000 as of late June.  Many of these involve basic queries for information about promotions, overtime and rules. The part of the backlog involving money — too little or too much pay, incorrect deductions, pay not received — has shrunk by two-thirds to 125,000.”
Meanwhile, Government departments not using FreeBalance Civil Service Planning were far less able to trap errors because the idea was that a customized version of PeopleSoft could do everything

That’s not to say that the entire cause of PeopleSoft problems was PeopleSoft and customization: serious project management deficiencies were compounded by the use of Enterprise Resource Planning software.
Another example of an ERP fail for government payroll is the City of Anchorage Alaska with an original budget of US$10.6M that has resulted in costs of about $US81M including “payroll error settlements cost the city an estimated $16 million”.
Success Patterns include: